“Willy Works,” aka Rick Chandler, welcomed a father and son to his Crown Point fireworks store earlier this week with his shameless salesman shtick.

“Dynamite!” replied Chandler, who everyone calls Willy so I will, too.

Willy, who lives in Lowell, is a fireworks-selling fixture in Northwest Indiana, especially south Lake County.

With a patch over his right eye, a towering red, white and blue hat, and a quip for every situation, the wily Willy is as colorful as a case of Roman candles set off at midnight.

“I’m just a Kentucky hillbilly who likes to make people smile, especially on the Fourth of July,” he told me during a tour of his star-spangled storefront behind Schoops Hamburgers on Main Street in Crown Point.

Think of Willy Works as the poor man’s Krazy Kaplan’s, which boasts several fireworks stores across the state and more than 250 familiar-faced highway billboards.

Similar to Krazy Kaplan’s, which uses a goofy face to brand its business, the 57-year-old Chandler created his alter-ego stage persona “Willy” to market his popular and patriotic pyrotechnics. And he’s been doing it successfully for a quarter century, using eye-catching signs of often-purposely-misspelled marketing slogans.

At least two generations of customers continually return to Willy each summer, even if it has become a game of “Where’s Waldo?” to locate his new business location.

“I first met Willy 15 years ago at a car wash he worked at when my kids were still in car seats and he still had both eyes,” said Carolyn Langlie-Lesnik of Crown Point.

“My kids think he’s great, and buy all their fireworks from him every year,” she said. “He has Willy Bucks for discounted fireworks, and if you say Willy Works when you go to his store you get free sparklers.”

But life wasn’t always such a bang-up job for Willy, a recovering alcoholic who made some admittedly dumb decisions in his younger days. At one point, he lost his wife, his kids, his home, his car, and his way in life.

He found himself living in a horse stall and getting paid $1 for every stall he cleaned.

“That was willy a wake-up call,” said the Merrillville High School graduate while showing off shelves of M-80s, bottle rockets, and underwater firecrackers.

One day he had the idea to sell the horse manure he was surrounded with to a local farmer, for $25 a load. The idea spread and he’s been an “entrepreneur” ever since, even though his hillbilly definition of that word is “French fertilizer.”

While working at a fireworks stand many years ago, he had another marketing idea to decorate his body with red, white and blue paint, to make a spectacle of him. He’s been making a spectacle of himself ever since in one-way or another.

“I’m a talker, I admit it,” said Willy, who routinely gives instructions to customers on how to safely use his merchandise. “I believe in giving people something to feel good about and then they’ll remember it next year. It’s subliminal.”

Once, while rummaging through garbage outside a gas station where he worked, he unearthed a tape cassette of Dr. Wayne Dyer, the motivational author and guru.

Something clicked, “a little spark,” noted Willy, who still enjoys sifting through trash for hidden treasures. In fact, a few large photos posted outside his store were found in the garbage, including the portrait of an anonymous Asian family, dubbed “Willy’s cozens.”

“They make all my fireworks,” he quipped.

His mini-warehouse is a far cry from the three tables of fireworks he began with more than 25 years ago. One section offers kiddy fireworks and the other “boom, bam, bang” section boasts wickedly explosive but cheaply priced items, including one kit that costs $700.

“You won’t find it cheaper anywhere else,” Willy boasted. “People can’t afford to spend $5,000 for a trip to Disneyworld this year, but they’ll pay $500 for fireworks.”

In the off-season of fireworks sales, Willy sells firewood from his Lowell home.

However, year-round Willy seems to embody a Yankee Doodle Dandy attitude about his life, his country and his patriotism, which he would wear on his sleeve if his shirts had sleeves.

He also isn’t afraid to invite God into his business with a hanging T-shirt that asks, “What was Jesus’ last name?” The backside suggests taking Jesus into your heart and giving him your last name.

“That’s not for everybody, but it’s the truth,” he told me while preparing for his free Willy Wednesday Fireworks Show.

He also isn’t hesitant to illustrate his admiration for the “good ol’ U.S. of A.” and he even has bumper stickers that ask: “Are We AmeriCAN’T or AmeriCAN?”

“I lived the American dream, and I love this country,” he gushed. “Because of our great country, Willy works at Willy Works. Isn’t that just willy wonderful?”

Countdown to the Fourth!

Sign-up to receive a "Willy Buck" in your Email and hear what's new at Willy's Works Fireworks! 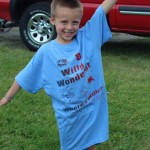